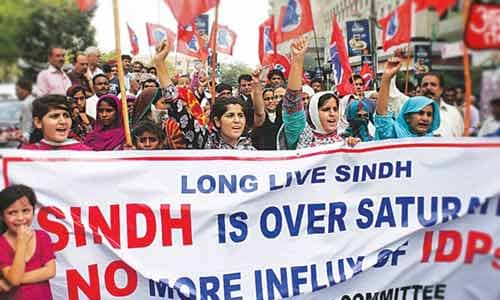 Sindhi peoples want independence from Pakistan on the 117th birth anniversary of Ghulam Murtaza Syed. After Baluchistan this time Sindh province want freedom from Pakistan because of corruption, Military rule, and lack of appreciation in Sindh province by the Pakistan government. Protesters in Pakistan raised posters of World leaders like Indian Prime Minister Narendra Damodardas Modi, French President Emmanuel Macron, Upcoming US elected President Joe Biden, and others for want help in this freedom movement.

One of the founders of modern Sindhi nationalism GM Syed was a pro-Gandhi ideologist and also the first prisoners after the creation of Pakistan because of his separate moments. The rally was led by Jiye Sindh Mutahida Mahaz located in Jamshoro, Sindh.

“Sindh was occupied by British East India Company and later it was forcefully occupied by Evil nation Pakistan,” said JSMM. The protester claimed that the Pakistan government slowly destroyed the Home of Indus valley civilization and Vedic religion because of government greed.

Along with JSMM, there are so many national parties in Sindh that want freedom from Pakistan. The Pakistan government already put JSMM on its terrorist list. Military rules support governments in this step and are continuously involved in Human rights violations in this region.

The Sindh region different from the rest of Pakistan, they are its language, culture, ideas. So, right now they don’t want to attach with Pakistan. Also, Sindhi people have their historical moments and harmonious environment.

Sindh region is very important from India’s point of view. The name of India was initially adopted by the Indus River in Sindh. They are many Sindhi ethnic people leaves in the Republic of India. The peoples in Sindh are very much good in the industry, marine navigations, philosophy, and maths.

Right now the main reason for this sparest movement is “The Sindhi people are now fed-up for slavery system of terrorist state Pakistan, so they want free Sindh for their development”.

Over the few years, Pakistan faced many separate movements because the Pakistan government only developed its Punjab province. The other regions are less developed and the people of these reasons are brutally tortured by the Pakistani Army. Pakistan is now slowly disbanding. The world is now looking into this matter. Right now, the Organisation of Islamic Cooperation is silent.

18 thoughts on “After Baluchistan, Now Sindh Wants Independence From Pakistan”