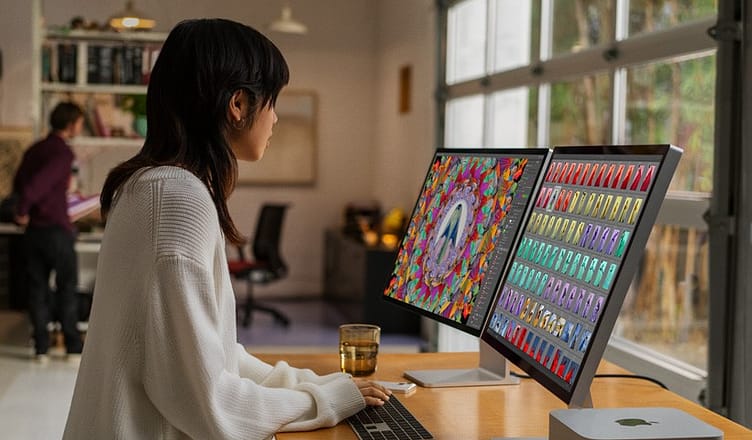 Every year Apple announces at the WWDC event a new tech from the future. But this year, Apple launched a piece of tech on not being included in WWDC. The WWDC22 will be held from 6th to 10th JUNE. This device wants a separate event, so Apple decided not to launch in WWDC22. So here comes the all-new apple mac studio.

What’s new in there?

Everything is new—this year, Apple is going out of the box. Now, The Apple mac studio has included apple m1 chips.

The Mac Studio is an entirely new personal computer. It’s not just a regular personal desktop; it has the fastest and most efficient processor ever built by apple. The Apple Mac studio has transformed any space into a studio.

It can support up to 9 streams of 8K ProRes video playback. It has 57 billion transistors. The processor can do up to 11 trillion operations per second—Apple Mac Studio M1 max Support for up to 5 displays. Apple Mac studio H.264, HEVC, and ProRes encode and decode. You can expand up to 8TB SSD with up to 7.4GB/s read speeds7.

The apple M1 Ultra build with a massive, powerful chip. According to apple, they put two M1 max chips in one place. So you can run any task. It’s maybe 3D environments that were previously impossible to render.

Apple M1 ultra can support 18 streams with 8k ProRes videos, Apple is showing what no other personal computer can’t do.

It has 114billoin transistors. The processor can do up to 22 trillion operations per second. It also supports 5 display max. Apple Mac studio m1 ultra H.264, HEVC, and ProRes encode and decode.

Which Mac Studio will you buy? What is the best possible configuration you can get?

Apple M1 Max is the money can buy. If you have a little more money, then Ultra is the best in class.

Apple M1 Max with 10-core CPU, 32-core GPU, and 16-core Neural Engine with 64GB unified memory is best for Futers. And The storage will be 512GB SSD storage max because you can use an external hard drive. It’sIt’s too Cheap outside.

Apple M1 Ultra with 20-core CPU, 48-core GPU, 32-core Neural Engine with 128GB unified memory. And the storage capacity will be 1TB SSD storage. The machine is already an future proof, and you don’t need to put extra stuff to waste your hard and cash.

Sudip Ghosh is a consumer goods entrepreneur with lots of hands-on experience in business start-ups, customer service, and marketing. He is equally an experienced writer and public speaker. You can find him on Facebook