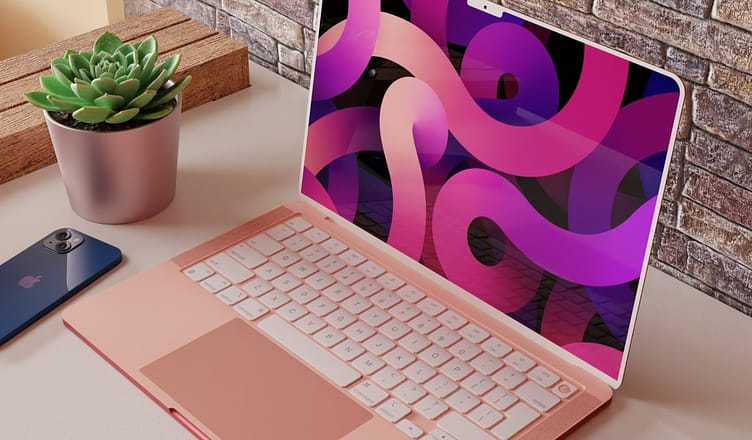 Well, the apple event has been finished now. Apple introduces the New MacBook Air M2. This laptop comes with Apple silicon. This is the second time where Apple has used its own chips to make their devices. The computer is now redesigned; we have seen from the previous MacBook Pro is very squared off. So this MacBook air is no longer wedge-shaped. It’s rectangular.

The laptop is the thinnest on the MacBook in the groups. The high is 11.3 millimeters, less than half an inch. And the weight in 2.7 pounds.

The laptop still uses a metal body and is easy to hold.

The laptop has four new colors, Space gray, silver, starlight, and Midnight. So, each MagSafe cable matches the color of the computer. If you plugged into the charger, it looks seamless. The design looks good. And personally speaking, I like the Midnight color.

Apple MacBook Air has 67 watts with an optional power brick. That’s good for adding a 50% charger in less than half an hour. Apple shows us the Dual USB-C types charges, which look fantastic. Although, that charges aren’t 67 watts charges. It is 35watts charges.

This laptop is a new quad speaker set up. The speaker setup is underneath the display and hinge—the mic array with Beamforming audio.

The new laptop has a difference between the old and new screens. The new screen is much more color accurate. The notch is looking more prominent. Now the display is 13.6 inches and looks bigger and better. The webcam is also 1080P.

The top of the magic keyboard is functional with touch id and backlit keys, Everything.

The midnight color picks up the fingerprints, which are hard to remove. But in the sliver or space gray, the color isn’t maybe to pick the fingerprint.

The M2 chips make more light and thinner laptops on the market. The performance on the chips is very, very impressive. This time apple promises 20% better than the previous year. And 30-35% better GPU performance. Battery life is the same as the previous year, which is 18 hours.

There is more memory bandwidth, up to 100 gigabytes per second.

The new laptop is more expensive than Apple MacBook Air M1. There is the apparent reason I don’t have the problem. However, Everything tech enthusiastic wants more performance and efficiency of the laptop. I would say I’m looking for M2 Pro and M2 ultra chips.

The price started at $1199 and was always $1499. This year everyone shocked. Apple also introduced the MacBook Pro 13-inch with M2 chips, and at the same price, $1499 then, you might confuse about which one you will take. The New Apple MacBook Air M2 has Everything new, exceptionally the battery. The Apple MacBook Pro 13Inch comes with only m2 chips, which is nothing new, a significantly bigger battery, and a functional cooling fan.