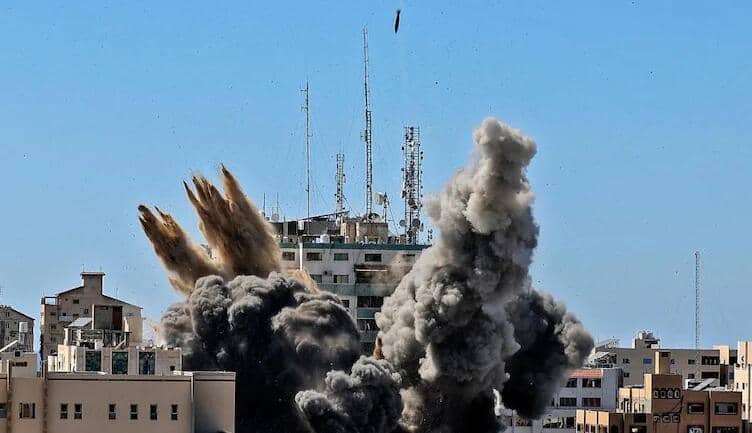 Saturday afternoon, an Israeli airstrike in Gaza city tall Al Jazeera office building and other international media outlets and a house where a family gathered to celebrate Ramadan.

Aj English producer said, “Israel has given a warning that it will bomb the building that Al Jazeera offices and other international media channels in Gaza City in one hour…our colleagues have already evacuated“. The Israeli air force missile targeted the building. The whole international community is condemning this attack. Al Jazeera blames Israel that Israel targeted the Al Jazeera building for reporting Israel Palestine Conflict. Al Jazeera also said that Israel doesn’t want to show the reality.

Read More: What is India’s Position in Israel Palestine Conflict?

What Israel said?
Israel defense forces said Hamas had turned residential areas in the Gaza Strip into military strongholds. Hamas uses the tall building for attacks, command, and control, etc. Basically, Israel says that Hamsa was operating this building, and it’s a lawful military target. Also added that we are attacking this type of building in the past, and we always send a warning before the attack and ensure that civilians would not be harmed.

A huge question is if Hamas operating this building and Israel send a warning SMS for evacuated the civilians obviously Hamas also informed about the attack. So in this particular aspect, Israel’s explanation is not acceptable.

After this airstrike Israel, another air raid on a refugee camp in Gaza City killed at least 10 Palestinians, mostly children.

So what do you think this is a lawful attack, or it’s not acceptable. Leave your thoughts on comment box.

Read More: Someone Should be Stop: Israel or Hamas