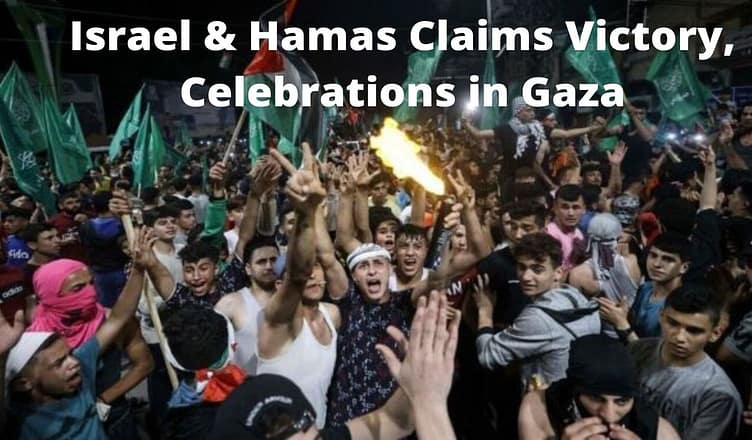 Israel and Hamas accept the ceasefire across the Gaza Strip border on Friday early morning. But 2 sides claim victory and celebrate.

What did you think? This is an actual victory? Because in Israel, 12 people died, including 2 children, and Gaza lost 200+ civilians.

Whenever the ceasefire into effect between Israel and the Palestinian militant group Hamas, Palestinian come onto Gaza street and shout, “God is greatest and thanks to God“.

US President Joe Biden said that it’s a genuine opportunity for progress.

1 day before this ceasefire on Thursday, more than 100 Israeli airstrikes were targeted in north Gaza. And Hamas retaliated with rocket fire.

A statement from Israeli Prime Minister Benjamin Netanyahu’s office said the security cabinet had unanimously accepted the ceasefire initiative by the Egyptian.

Palestinian groups Hamas and Islamic Jihad confirmed the ceasefire in a statement.

Israel Defense Minister Benny Gantz said that The reality on the ground would determine the continuation of operations.

A Hamas official told the Associated Press that the ceasefire accepts by Israel amounts to a victory for the Palestinian people and a defeat for Israeli Prime Minister Benjamin Netanyahu. Soon after the ceasefire started, many Palestinians took to the street of Gaza to celebrate. Loudspeakers from mosques announced “the victory of the resistance achieved “.

But Will The Ceasefire Last?

Basem Naim, from the Hamas Council, said he was sceptical about whether the truce would last. And also, he said, “without justice, without stopping the Israeli aggression and Israeli atrocities against our people in Jerusalem, the ceasefire will continue to fragile,”.

A senior Hamas leader said that Israel had promised to lift their hand off Sheikh Jarrah and Al-Aqsa Mosque. But Israel denied there was any such understanding.

Who Is Not Celebrating?

On both sides, survivors and the bereaved are not claiming victory. The horrible tradition in these things is that sometimes both sides like to show they can fire the last shot, and there is an intense period in the last hour or so.

What Did Biden Say?

President Joe Biden said he commended Mr. Netanyahu in a phone call for congratulation and again said Israel has the right to defend itself.

What Is Egypt Role?

Egypt President Abdel Fattah Al-Sisi has ordered two security delegations into Israel and the Palestinian Territories to uphold the ceasefire.