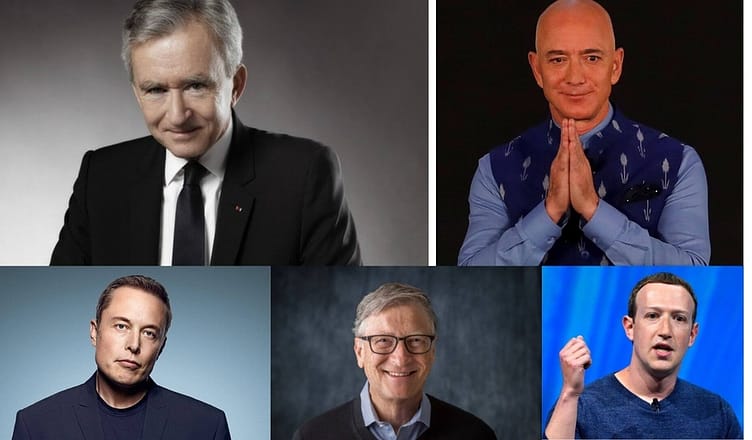 Today, The world’s richest person becomes the richest, and they are trying to hold the position as much as possible. In between, the position might change the goal is once. Today is the day. Now, the world’s risest person does not belong to the USA. He belongs from France. This list is the basis of Forbes’s real-time world richest person. Today, I share the 5 Richest People In The World.

#1. Elon Musk is the CEO and Chairman of Tesla inc, and also, He is the founder of SpaceX. He was born in South African. As of now, his net worth is $230.4 billion.

#2. Bernard Arnault & family. He is the Chairman and CEO, of LVMH Moët Hennessy Louis Vuitton. Real-time net worth is $$148.6 billion He is from France.

#3. Jeff Bezos is the founder and CEO of Amazon.com. His real growth is $141.1 billion Jeff Bezos is born and brought up in the USA.

#4 Bill Gates is a co-founder of Microsoft. He was born in Seattle, Washington. His net worth is around $127.8 billion.

#5 Mark Zuckerberg is a co-founder and CEO at Facebook.Inc. He was born in White Plains. As of now, his net worth is around $118.4 billion.

To know more, Here is the list of Forbes richest people in the world

Elon Reeve Musk was born on June 28, 1971, in Pretoria, South Africa. He was raised in South Africa later. He moves to Canada for higher study. His mother was Candian, and his father was South African. When he was 17 years old, he moved to his uncle for further study. He achieved bachelor’s degrees in economics and physics. After that, He again moved to California, the U.S., in 1995 to attend Stanford University but decided instead to pursue a business career.

His first ever company, which he and his brother started. That Company’s name is Zip2. Later on, He created x.com. It’s an online banking service. However, that company was sold in 2001 at $1.5 billion. After that, the company will know as PayPal.com.

In 2001, Elon Musk started another company which is SpaceX. This company is associated with a Russian agency. The company motto was traveling in space at a very effective cost. As of now, the company was trying to reach its goals.

Elon Musk had another company which is called Tesla Moter inc. He is not the founder of the company, but he is the inventor of the Tesla motor. His recent company is Neuralink. Neuralink was started in 2016.

Bernard Arnault Étienne Arnault was born on 5th March 1949 in Roubaix, France. He strated study in Lycée Maxence Van Der Meersch in Roubaix. After that he graduated from the École Polytechnique in 1971. Bernard Arnault is 6 feet tall.

Eventually, He started as a real estate developer. Later in 1988, he created LVMH. As of now, the company’s net worth is $193.6 billion. Arnault has a subsidiary company, Louis Vuitton, Dior, Fendi, Tiffany & Co., Givenchy, and MORE.

Jeffrey Preston Jorgensen was January 12, 12, 1964, in Albuquerque, New Mexico, U.S. Jeff Bezos was raised in Houston and later Miami. He graduated from Princeton University in 1986. He holds a degree in electrical engineering and computer science—his height is 5.6 feet.

Jeff Bezos start working on Wall Street variety of related fields. Later on, he created Amazon in 1994. When Amazon started selling books online and later on, they sold other E-commerce products and services. Includes video and audio streaming, cloud computing, and artificial intelligence.

Amazon is the largest online selling platform. As of now, the company’s net worth is $193 billion.

Eventually, the company was found in a garage in Jeff Bezos’s house. His parents invested in this company estimated $300000. His parents, as a partner, invest in his company.

He and his childhood friend jointly develop the world’s first personal computer software. He is the Co-founder of Microsoft. Since Mr. Gates listed on the Forbes world the wealthiest person, he never falls.

As of now, His estimated net worth is $135 Billion.

Right now, Microsoft appoints new CEO, Satya Nadella. In March 2020. Since leaving day-to-day operations at Microsoft, Gates has continued his philanthropy and works on other projects. According to the Bloomberg Billionaires Index, Gates was the world’s highest-earning billionaire in 2013, As his net worth increased by US$15.8 billion to US$78.5 billion.

Mark Elliot Zuckerberg, known as Mark Zuckerberg. He is the Co-founder at Facebook.com

Zuckerberg attended university, wherever he launched the Facebook social networking service from his bed-chamber on February four, 2004, with school roommates Eduardo Saverin, Saint Andrew the Apostle McCollum, Dustin Moskovitz, and Chris Hughes. Originally launched to pick school campuses, the location expanded speedily and eventually on the far side faculties, reaching one billion users by 2012. Zuckerberg took the corporate public in might 2012 with majority shares. In 2007, at age 23, he became the world’s youngest successful have. As of Gregorian calendar month 2021, Zuckerberg’s internet price is $123.1 billion, creating him the 5th-richest person in the world.